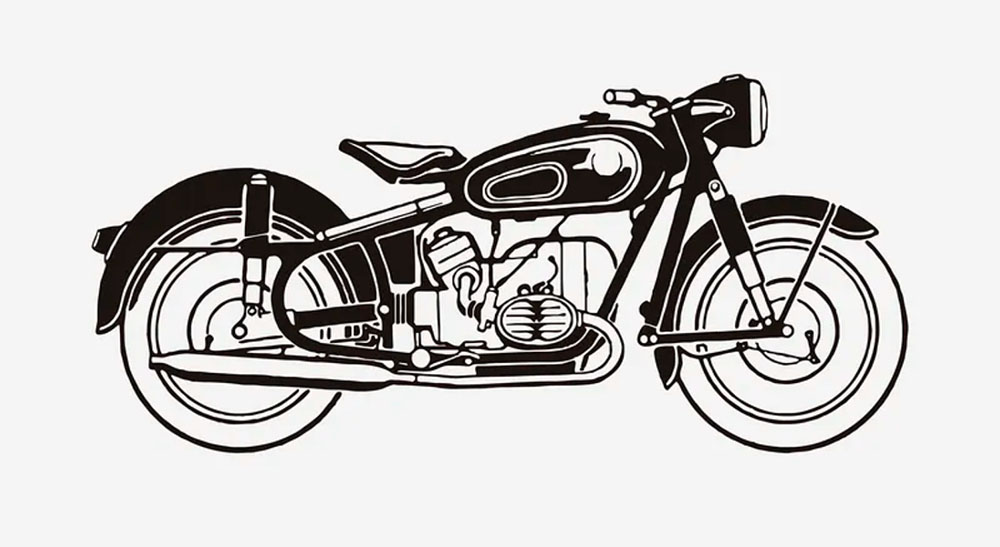 If you’re a fan of BMW motorcycles, then you know that the company has a long and storied history in the world of two-wheeled transportation. BMW has produced some truly amazing motorcycles over the years, and many collectors consider vintage BMW bikes to be some of the most prized possessions in their collection. In this article, we will take a look at 10 of the best vintage BMW motorcycles ever made, and we will explore what makes them so special.

BMW making motorcycles since the early 1920s. The company has produced some of the most iconic motorcycles of all time, including the R75/5, R90S, K75RT, and more.

What makes these vintage BMW bikes so special is their combination of performance and style. Riders today can still find many classic models for sale online or at auctions. If you’re looking for a unique motorcycle that’s sure to turn heads, consider buying a vintage BMW bike.

Also Read: How Much Does It Cost To Paint A Motorcycle The BMW R75/5 is a boxer twin motorcycle manufactured in Berlin, Germany, by BMW for the model years 1970-1973 and featuring electric starting and telescopic forks.

For the second half of the 1973 model year, BMW lengthened the rear swingarm by two and a half inches (six centimeters), resulting in the “long-wheelbase” (LWB) models. This enabled a larger battery while retaining the kick starter.

The /5 was BMW’s first series to be manufactured completely in Berlin, as by 1969 all of Munich’s production capacity was needed for automobiles. BMW manufactured its 500,000th motorcycle in 1973.

The /5 models are air-cooled, four-stroke, opposed-twin (boxer) engines with hemispherical combustion chambers. The engine is built around a one-piece tunnel crankcase.

The camshaft is driven by a duplex chain and is located below the crankshaft (unlike the /2 series which had the gear-driven camshaft above the crank).

This reversed arrangement improves ground clearance for the same center of gravity and assists in lubrication of the camshaft. Valves are actuated by the camshaft through-hardened followers, push rods, and rocker’s arms.

The 500 cc and 600 cc models have been equipped with Bing slide-type carburetors with 26 mm throats.

The R75/5 comes with 32 mm Bing CV (Constant Vacuum/constant depression) type carburetors. As in all BMW motorcycles at the time, the clutch is a single-disk dry clutch.

The final drive is by the shaft, running from the transmission by a universal joint to an oil bath within the right rear swing arm and connecting to a bevel gear and ring gear on the other end.

Unlike the /2 models (except the 1968-69 US models), the /5 models are equipped with telescopic front forks, 12-volt alternator and electrics, and standard tachometer and turn signals. The BMW R90S is a vintage BMW motorcycle that was first produced in 1973. It is considered to be one of BMW’s most iconic and prized motorcycles.

The R90S was the successor to the earlier R60/R69S models. It featured a more powerful engine, updated suspension, and new styling.

The R90S was also the first BMW motorcycle to feature a fairing. Production of the R90S continued until 1976 when it was succeeded by the R100S.

A total of 17,455 R90S bikes were produced during its three-year production run.

The R90S was powered by an air-cooled 850cc boxer twin engine that produced 60 horsepower. It had a five-speed gearbox and a chain final drive.

The bike could reach a top speed of approximately 125 miles per hour. The R90S featured telescopic forks, twin shocks, and disc brakes.

The R90S was available in a variety of colors, but the most iconic was the two-tone smoke grey paint scheme. This color scheme was later used on BMW’s R850/1100R model in homage to the original R90S.

The BMW R90S is considered to be one of the most important motorcycles ever produced by BMW. It ushered in a new era of BMW motorcycles that were more powerful, stylish, and sophisticated than anything that had come before.

The R90S set the stage for BMW to become a significant player in the world of high-performance motorcycles.

BMW would go on to produce many more iconic motorcycles in the years that followed, but the R90S will always hold a special place in the hearts of BMW fans around the world. The BMW R100RS was a motorcycle manufactured by BMW Motorrad from 1976 to 1996. It was the first BMW motorcycle to be fitted with a frame-fixed full fairing, a feature pioneered by the Vincent Black Prince.

This innovation was a departure from previous touring fairings, giving birth to the modern sport touring motorcycle.

The R100RS was powered by BMW’s air-cooled boxer twin-engine, with a capacity of 980cc. The RS designation indicated that it was the Road Sport model – the sportiest version of BMW’s touring range.

The R100RS had several other notable features, including an enclosed drive chain, electric start (from 1980 onwards), and BMW’s innovative Telelever front suspension, which was introduced on the R100RT in 1988. The K 75 RT is characterized by its horizontally lengthways in-line engine, which transmits its power via an intermediate shaft and a single-disc dry clutch to the five-speed gearbox behind it in the direction of travel.

The engine transmission block is also used as a load-bearing component of the chassis: the rear suspension is mounted on the transmission and has no direct connection to the frame. The BMW K 1200 RS replaced the K 75 RT in 1996. It was designed to be an entry-level, all-purpose motorcycle that could be used for commuting, touring, and off-road riding. The Scarver was equipped with a 650cc, four-stroke, single-cylinder engine that produced 36 horsepower and 42 lb-ft of torque.

It had a five-speed transmission and a chain final drive. The Scarver had a dry weight of 375 pounds and a seat height of 30.0 inches. It was available in two colors: black and silver.

The Scarver was discontinued in 2005 and replaced by the F800 series, which was a different class of motorcycle aimed at the middleweight sport bike segment. The BMW R 18 Classic is a modern cruiser that takes design cues from BMW’s long history of producing motorcycles suitable for touring.

The most notable features of the R 18 Classic are its boxer engine with 1802cc of displacement, drop-shaped tank, and elongated exhaust.

These elements come together to create a motorcycle that is both visually appealing and mechanically sound.

The engine delivers instant response early in the torque curve, making it a great choice for riders who enjoy relaxing tours.

Overall, the BMW R 18 Classic is a great choice for riders who appreciate BMW’s long history of producing quality motorcycles. It was the first BMW motorcycle with an opposed-twin engine and shaft drive. The RT designation stands for Reise-Tourer, German for travel tourer.

The R80RT was available with a 650 cc or 800 cc engine. The 650 cc version was not available in the United States due to emissions regulations. BMW North America only imported the 800cc models from 1980-1987, after which BMW NA did not import any more RTs until the early 1990s when they began importing the BMW R1100RT.

The BMW R80RT was a popular motorcycle in its day and is still sought after by collectors and riders alike.

Its combination of shaft drive, opposed twin-engine, and touring-oriented features made it a unique offering in the marketplace, and its timeless design has helped it remain popular even today.

If you’re lucky enough to find one of these bikes for sale, don’t hesitate to snatch it up. The 1967 BMW R60/T is a beautiful motorcycle that was ahead of its time. It has a twin-cylinder, four-stroke boxer engine that produces 36 horsepower.

The bike also has a four-speed gearbox and an electric starter. One of the most interesting features of the R60/T is its styling.

The bike has a teardrop-shaped fuel tank and an integrated headlight. The R60/T was also one of the first BMW motorcycles to have a frame made from chrome-molybdenum steel.

The 1967 BMW R60/T is a great motorcycle for collectors because it is both rare and stylish. If you are lucky enough to find one, it is sure to be a prized possession in your collection. The BMW R100GS is a motorcycle that was produced by BMW Motorrad from 1988 to 1996. It belongs to the GS family of dual-sport motorcycles.

The “GS” initials stand for Gelände/Straße (German: off-road/street). BMW introduced the R100GS in 1988 as a replacement for the earlier BMW R80G/S.

The BMW R100GS was powered by a 980 cc air-cooled boxer twin engine. This engine was based on the earlier BMW R80 motor, but with increased bore and stroke.

The BMW R100GS was the first BMW motorcycle to be fitted with an electronic fuel injection system.

This system was developed by Bosch and incorporated into the existing Motronic engine management system.

The result was a more reliable and smoother running engine, with increased power and economy.

The BMW R100GS was also the first BMW motorcycle fitted with an ABS braking system.

This system was developed in conjunction with Bosch and became available as an option on the R100GS from 1990 onwards.

The BMW R100GS was produced in several different versions, including the standard GS, the GS/PD (Police Department), and the GS/Adventure.

The Adventure model was introduced in 1993 and featured several modifications designed to make it more suitable for off-road use, including a larger fuel tank, an engine guard, and a taller windscreen. It was the company’s first sports bike and featured a liquid-cooled, inline four-cylinder engine with DOHC and eight valves.

The BMW K100RS was a popular sportbike in its day, thanks to its powerful engine and sharp handling.

Today, the K100RS is a coveted collector’s item and fetches high prices on the used motorcycle market.

If you’re lucky enough to find one in good condition, the BMW K100RS is a great bike to add to your collection.

BMW vintage motorcycle fans will not be disappointed with this classic machine.

So, which BMW vintage motorcycles are the best of the best? Here are some picks, that are somehow not included in the above list.

The BMW R32 was first introduced in 1923, and it was the company’s very first motorcycle. It featured a boxer twin engine that produced just over eight horsepower. only 700 units were ever produced, making it a true rarity.

The BMW R51/R61 was introduced in 1929 and was an update to the R32. It featured a more powerful engine, capable of producing around 20 horsepower. BMW only produced about 11,000 units of this motorcycle.

The BMW R75 was first introduced in 1938 and is often considered to be BMW’s best motorcycle of all time. It was a true workhorse, used by the German military during World War II. BMW equipped the R75 with a sidecar, making it one of the few motorcycles that could truly be used as a vehicle for multiple people.

The BMW R90S was introduced in 1973 and was BMW’s attempt at creating a true American-style muscle bike. It featured an air-cooled boxer twin engine that produced around 60 horsepower. BMW only produced about 16,000 units of this motorcycle.

The BMW K100 was introduced in 1983 and was a radical departure from BMW’s traditional boxer twin design. It featured a water-cooled inline four-cylinder engine that produced around 100 horsepower. BMW produced this motorcycle until 1992.

The BMW R1100S was introduced in 1999 and featured a boxer twin engine that produced around 85 horsepower. BMW only produced about 11,000 units of this motorcycle.

The BMW HP-II was introduced in 2006 and was a high-performance version of BMW’s popular R1200GS motorcycle. It featured a boxer twin engine that produced around 125 horsepower. BMW only produced about 500 units of this motorcycle.

The BMW S1000RR was introduced in 2010 and is BMW’s current flagship sportbike. It features a 999cc inline four-cylinder engine that produces an incredible 190 horsepower. BMW has sold over 30,000 units of this motorcycle since its introduction.

If you’re a fan of BMW motorcycles, then there’s no doubt that you’ll appreciate the company’s long and illustrious history in the world of two-wheeled transportation. BMW has produced some truly amazing motorcycles over the years, and many collectors consider vintage BMW bikes to be some of the most prized possessions in their collection.